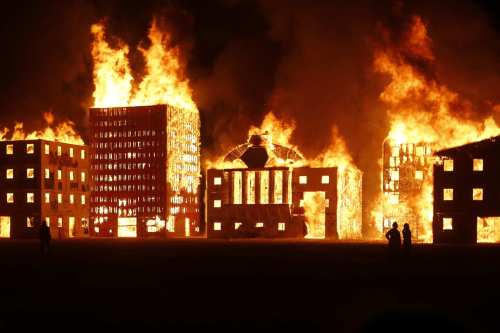 A Burning Man Festival group decided they’d had enough of Wall Street’s greed. So they constructed a replica Wall Street consisting of buildings like “Bank of Un-America,” “Merrill Lynched,” “Goldman Sucks,” and “Chaos Manhattan.” And on Saturday night, 2012, they burned it to the ground.

“Burn Wall Street,” as this bit of desert-based art was called by an Oakland based artist as his attempt to inject some sanity back in the debate over the global financial industry.

Did the artist sizzle in the Oakland warehouse fire, 2016, where the landlord conveniently didn’t comply with codes, 36 people fried, and an adequate profit was maintained? After all profit is the American Mantra, people and place are secondary.

by safe guarders of