“The world has many kings, but only one Michelangelo”

In 1537, Pietro Aretino, poet, critic, and public relations advocate, offered his alliance to the artist in a letter. Michelangelo, irascible and often uncommunicative, gave a brief cordial reply declining the offer. Michelangelo never worked with others as an equal. Michelangelo was an independent contractor with higher aspirations than his class. Aretino was perhaps the first to the declare an artist to have powers that “rivaled those of God.” Michelangelo acted as if he were the equal of God’s emissary of earth, Pope Clement VII. The pope, a Medici whose noble family ruled Florence off and on during the 16th century, conversed frequently with the artist, a tradesman, whose social status was far beneath the Roman Catholic Church’s leader. Cardinals and kings thought the familiarity unwise. Aretino created the myth of supreme artistic genius.

satin DProbably using a contract specifying a cost and a time limit, Pope Clement IV engaged Michelangelo to carve tombs in Florence’s San Lorenzo Basilica to commemorate the two of the Medici family’s lesser members: Lorenzo II, Duke of Urerbino, and Giuliano de Medici, Duke of Nemours. For ten years, 1524–1534, Michelangelo labored, delayed, complained, and controlled the fabrication of the project down to the smallest detail. The pope grumbled he wished the artist would pay a bit more attention to the jobs the pope had given him. Michelangelo’s enemies said of him that he never completed anything while monopolizing the best projects for himself and never used the assistance of others. The wall tomb for the Duke of Nemours was never finished.

The tomb is a powerful composition, oddly discordant, yet imbued with energy at once distinctive to the artist and evocative of his client’s family’s authority. The sculpture, Day, is male with a highly polished body, but its head, partly obscured behind a mammoth shoulder, appears roughly chiseled and unfinished, contrasting with Night, a polished female with a rather masculine body whose breasts seem strangely appended. Day is twisted backward in tension, and coiled in frustration, perchance a partial statement of the artist’s outer persona. Night is bent and turned forward in melancholy, and stilled by grief, perhaps capturing the artist’s hidden homosexuality layered under a spoken spirituality that contemplates death, the tortured fate of sodomites. Day, the time of light, is turned away from illumination, and Night, the time of dark, is turned toward the shadows. Both sculptures, balanced at the two ends of the sarcophagus, appear to be sliding off its bowed surface, while the figure above seems unengaged and remote to what is below.

The figure above that stands for the Duke. This sculpture embodies the glory and authority of Rome, which the Medici’s saw as their heritage. Obliged by agreement to glorify the powerful family, the artist composed a vault that incorporates a duality. The duke doesn’t look like the duke and isn’t dressed like the duke. Michelangelo recreates a heroic leader with his sword balanced across his knees and expressing a gaze of disinterest. He turned Guiliano de Medici into a type. A writer later remarked the artist gave the duke “a size, proportion and beauty,” because “in a thousand years nobody would know they had been different.” The artist fashioned a dynamic assembly of contradictions that are a testament to his own genius. Michelangelo will be known forever, the Medici dukes will fade in an obscure past. The artist accomplished his aspiration to be more than the ruling aristocracy. The Medici Tomb, along with the Pieta, David, the Sistine Chapel ceiling, and the Last Judgment, marks the artist’s place among the gods of art.

Tomb of Giuliani de Medici, Duke of Nemours, by Michelangelo

Artists like Michelangelo’s acclaimed challengers — Leonardo Da Vinci, Raffaello Santi (Raphael), and Sebastiano del Piombo — were highly paid employees for their work with brush, mallet, and chisel by the rulers in France, Spain, Florence, and the Papal States. Their jobs were to legitimize the rulers. The dukes, the kings, and the popes needed portraits, tombs, glorifying sculptures, libraries, and residences to reflect their status and make them comparable to the Roman ancestors. They needed art that made them heroes and that gave them metaphors immersed with Christian theology. The artists made visible the power, glory, and ethics of the age. This is what artists did long before the Renaissance. This role extended back in time to the Romans, Egyptians, Hittites, Assyrians, and to the dawn of human hierarchies. In the distant past only a few had identities. Many weren’t even free. They were slaves doing the bidding of rulers who were often the religious elite. The Renaissance artist rattled the role, but they didn’t break it.

Three centuries would pass before the subservient position of the artists changed, and it only changed in means, not in value. The French monarch in1648 established the French Academy to control cultural production for the benefit of the crown. The concept was to insure that art in terms of its content and its quality serve the sovereign’s power equal to its political dominance. Neo-classicism founded on the veneration of Greeks and Romans became the prevailing style. “Theth of Horatii,” 1784, by Jacques-Louis David is a telling example. The British crown not to be out done by the French, established the Royal Academy. Portraits of distinguished nobility became the English obsession. Thomas Gainsborough’s 1777, Portrait of Anne, Countess of Chesterfield, 1777, comes to mind. Academies in Vienna, Berlin, Stockholm, Madrid, and St. Petersburg follow. Painting and sculpture supported the values of the upper classes. In America, The Philadelphia Academy of Art was founded in 1805. Its goal was to promote the Odemocratic values of the new democracy. This ideal faded by the late 19th Century, when the Robber Barons sought cultural validity through acquisition of the aristocratic approved art. 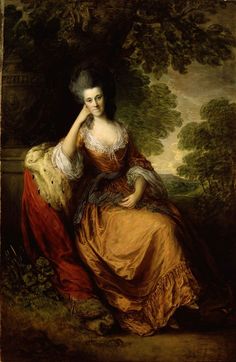 The only blip to national academy dominance of art production was the French Revolution, where the royals died by the guillotine. The revolutionaries declared the elite arts to be of no use to the nation. This verdict didn’t last long. Napoleon, quickly learning the importance of the arts in supporting a regime, reversed the situation. Not until artists established an individual status often connected to alternative political philosophies did the situation start to alter. In France, it was Realism, whose two champions Millet and Courbet rocked the arts establishment. Courbet, a political radical with a supreme ego, formulated the concept of “Realism,” which others philosophers, poets, and writers gave intellectual heft. The artist stated, “Realism would not imitate the art of ancients.” Realism would “represent the customs, ideas,” and “the appearance of my own era according to my own valuation.”

Gustav Courbet, like Michelangelo, saw himself the equal if not superior to his aristocratic clients. His painting “The Meeting,” 1855, is an excellent example of both the artist’s realism and his egoism. On a country road, the artist is greeted by his patron, Alfred Bruyas, and his servant Calas. The servant bows his head to the great artist, while Bruyas, doffs his hat. The artist, dressed like a workingman with his painting supplies hung off his back, accepts the adulation with head raised in a regal pose. Bruyas, son of a wealthy financier, had a 30-year career as a serious collector of art, and he believed art could change lives and promote social progress. He championed Courbet, who fancied himself a rebel against the prevailing concepts of art and the aristocratic rulers of France. Courbet refused to accept the Legion of Honor award from Emperor Napoleon III. His fame and his wealth came from the patronage he viewed as inferior to his genius.

When Paris became the socialist commune in 1871, after France’s loss to Prussia, Courbet joined the communards and proposed a significant role for artists, in which they would participate in the running of and selecting exhibitions for Paris’s public museums. The fine arts section of the Institute of France and the French Academy would be closed. Metals and decorations would be abolished. Artists have not been the clearest thinkers about management or governance. The plan for artists’ control of the French art institutions quickly broke down. The commune didn’t last long and Courbet paid a heavy price for his involvement. He was briefly imprisoned and accused of initiating the destruction of the Napoleonic Column in Place Vendome, for which the new right wing state demanded that he pay the price for its reconstruction. The artist escaped into exile in Switzerland. The artist inflated to enormous size by disappointments of his fortune, died a drunk. In his characteristic self-important manner, Courbet claimed he was the foremost drinker in the Canton of Vaux, Switzerland. He colluded in the fraudulent creation of paintings by others that he signed. His reputation was vastly diminished.

The contradiction of his political views and the reality of his situation as a supplier of luxury objects for the rich and the nobility never troubled his conscience. He considered himself a great artist beyond the ordinary human. Current art historians and subsequPlaent collectors, especially American capitalists of the late 19th century, have honored that assessment. The Metropolitan Museum of Art in New York abounds in Courbet paintings. Many of the landscapes are marvelous. The world of legitimized art returned to its prior status. Yet Courbet began the great shock of Modernism that ended the culture academies when the next generation of artists — the Impressionists, and Post-Impressionists — demolished classicism, romanticism, and realism with a new way of seeing. They ended the old context, but not the reigning social value of art.

Art of that Day, like Michelangelo’s unfinished sculpture, squirmed in a new light revealed in a transient, engaging, enticing, and ultimately very accessible way to the minimally visually knowledgeable, while the late 19th century Night, like Michelangelo’s enigmatic creation, remained the veiled, but unspoken force as it has always been. The luxury product held by the elite, which expresses their cultural hegemony. Look for Article Three in the art and economics series: Cezanne to Warhol – Pissing in the Photo Booth.